House of Prayer Church is “a church of all nations, going to all the nations”. (Formerly known as First Assembly of God, Waterbury.)

Reverend Coleman Barlow and his wife, Nancy, opened First Assembly on Father's Day, June 1979. They first met in the old Methodist Church on West Main Street and later in the Jewish Community Center in Middlebury, Connecticut. After years of faithful service, Reverend Barlow transferred leadership of the church over to Reverend William Ulsh. Pastor Ulsh led the congregation to purchase property on Thomaston Ave. The first service in the building on Thomaston Ave. was held December, 1987. The church has held services at that location ever since. After Pastor Ulsh, First Assembly was led by Pastor Albert Andreason for six years, then by Pastor Timothy Roddam for two to three years. Our current pastor, Reverend James Lilley and his wife, Verna Lilley, came to Waterbury in April of 1998.

In 2011 to 2013, the church added a new upstairs Sanctuary, conference room, bathrooms and office spaces in the Family Life Center. In 2017, the church launched it’s “Feed the City” campaign. House of Prayer Church is currently building a Coffee House/Bookstore, new Daycare Center, and an expanded Food Pantry.

In 2018, after a decade of sensing the Lord's leading to rename First Assembly, Pastor James Lilley and the leadership team changed the name of the church to House of Prayer Church.

The Lord continues to bless the city of Waterbury, surrounding regions, and other countries of the world through House of Prayer Church. We are filled with thankfulness for what the Lord has done and we look with eager expectation to see what God will do thru House of Prayer Church in the years to come. 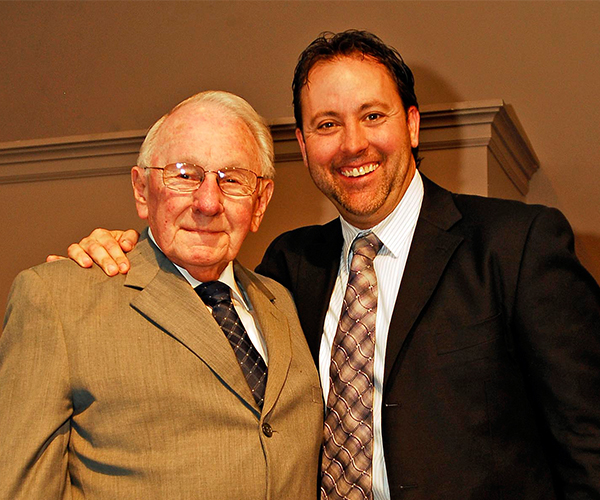 Our house shall be called a House Of Prayer for all nations. (Isaiah 56:7, Matthew 21:12-17) This is the heartbeat of our church. This is the furnace room of the fire of God. Our goal is to bathe everything in prayer. To be totally dependent on God for the outcome. (2Chr. 32:8) Our goal is 24/7/365 prayer in our prayer center. Building a continual fire on the altar that produces an open Heaven over our region. The spiritual fruit will be the end-time harvest of souls coming forth.

The Word of God

Our plum line of building and directing is God’s Holy, inspired and anointed Word. The Word will be preached every Sunday and taught in our Girl’s Inc & Royal Rangers/School of the Word/Youth Group/Young Adults/Celebrate Life Group/Small Groups. “So mightily grew the word of God and prevailed.” (Acts 19:20)

Openness to the Holy Spirit

We see the glory of God filling His house through Spirit and Truth Worship (Jn. 4:24) (Hag. 2:8, 9). We see all nations worshiping together every Sunday. We see singing, dancing, drama, flags and the arts being used for God’s glory. Anointed celebratory praise & worship teams will be sent out of our church into all the nations. We are redeeming the arts back to God!

Strategic small groups and church fellowships will be a part of our calendar. Making time to enjoy God, creation and one another is key to maintaining a healthy life. We must carve time out to fellowship as the 1st century church did. (Acts 2:42)

(Mt. 28:19) We have a leadership pipeline flowing in our church. We offer nursery ages 1-6, Children’s Ministry ages 7-12, Royal Rangers & Girl’s Inc. 3 yrs old thru 8th grade, Youth Group ages 13-18, Young Adults 18+. Our adults can go through the School of the Word process and attend our Bible School. We encourage all to get plugged into a Small Group.

(Mt. 28:19, Acts 1:8) The mindset of our church is to bring in the end time harvest. We will do this by relationship evangelism. The statistic is 85% of people come to Christ through a friend. Let us use this model as well as our public services to bring people to Christ. We have strategic outreaches to bring the message and love of Jesus to our local community, to our region, and to other countries.

The Baptism in the Holy Spirit is a Special Experience Following Salvation that empowers believers for witnessing and effective service, just as it did in New Testament times. [1 of 4 cardinal doctrines of the A/G] Luke 24:49; Acts 1:4; Acts 1:8; 1 Corinthians 12:1-31

The Initial Physical Evidence of the Baptism in the Holy Spirit is ‘Speaking in Tongues,’ as experienced on the Day of Pentecost and referenced throughout Acts and the Epistles. Acts 2:4; 1 Corinthians 12:4-10; 1 Corinthians 12:28

Every Person Can Have Restored Fellowship with God Through ‘Salvation’ (accepting Christ’s offer of forgiveness for sin). [1 of 4 cardinal doctrines of the A/G] Luke 24:47; John 3:3; Romans 10:13-15

Every Person Can Have Restored Fellowship with God Through ‘Salvation’ (accepting Christ’s offer of forgiveness for sin). [1 of 4 cardinal doctrines of the A/G] Luke 24:47; John 3:3; Romans 10:13-15

The Baptism in the Holy Spirit is a Special Experience Following Salvation that empowers believers for witnessing and effective service, just as it did in New Testament times. [1 of 4 cardinal doctrines of the A/G] Luke 24:49; Acts 1:4; Acts 1:8; 1 Corinthians 12:1-31

The Initial Physical Evidence of the Baptism in the Holy Spirit is ‘Speaking in Tongues,’ as experienced on the Day of Pentecost and referenced throughout Acts and the Epistles. Acts 2:4; 1 Corinthians 12:4-10; 1 Corinthians 12:28

Sanctification Initially Occurs at Salvation and is not only a declaration that a believer is holy, but also a progressive lifelong process of separating from evil as believers continually draw closer to God and become more Christ-like. Romans 12:1,2; 1 Thessalonians 5:23; Hebrews 13:12

The Church has a Mission to seek and save all who are lost in sin. We believe ‘the Church’ is the Body of Christ and consists of the people who, throughout time, have accepted God’s offer of redemption (regardless of religious denomination) through the sacrificial death of His son Jesus Christ. Ephesians 1:22,23; Ephesians 2:22; Hebrews 12:23

A Divinely Called and Scripturally Ordained Leadership Ministry Serves the Church. The Bible teaches that each of us under leadership must commit ourselves to reach others for Christ, to worship Him with other believers, and to build up or edify the body of believers–the Church. Mark 16:15-20; John 4:23,24; Ephesians 4:11-16

Divine Healing of the Sick is a Privilege for Christians Today and is provided for in Christ’s atonement (His sacrificial death on the cross for our sins). [1 of 4 cardinal doctrines of the A/G] Isaiah 53:4,5; Matthew 8:16,17; James 5:14-16

The Blessed Hope—When Jesus Raptures His Church Prior to His Return to Earth (the second coming). At this future moment in time all believers who have died will rise from their graves and will meet the Lord in the air, and Christians who are alive will be caught up with them, to be with the Lord forever. [1 of 4 cardinal doctrines of the A/G] 1 Thessalonians 4:16,17; Romans 8:23; Titus 2:13; 1 Corinthians 15:51,52

The Millennial Reign of Christ when Jesus returns with His saints at His second coming and begins His benevolent rule over earth for 1,000 years. This millennial reign will bring the salvation of national Israel and the establishment of universal peace. Zechariah 14:5; Matthew 24:27; Matthew 24:30; Revelation 1:7

A Final Judgment Will Take Place for those who have rejected Christ. They will be judged for their sin and consigned to eternal punishment in a punishing lake of fire. Matthew 25:46; Mark 9:43-48; Revelation 19:20; Revelation 20:11-15; Revelation 21:8

New Heavens and a New Earth that Christ is preparing for all people, of all time, who have accepted Him. We will live and dwell with Him there forever following His millennial reign on Earth. ‘And so shall we forever be with the Lord!’ 2 Peter 3:13; Revelation 21; Revelation 22